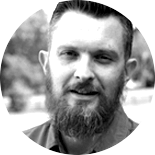 is the Preaching Pastor at Emmaus Bible Church in Omaha, Nebraska, USA. He is married to Christie and has six children. Erik blogs at The Ordinary Pastor.

Erik became a Christian in his early 20s. Although he hadn’t grown up in a Christian home, he began to feel a heavy conviction for his past sin. Erik sought out a Christian co-worker, who opened up the Bible and showed him from the book of Romans that he was a sinner—but that Christ loves sinners and had died for him. Overwhelmed by what he was hearing, Erik remembers thinking that if it were all true, then he’d give everything to follow Jesus. By God’s grace, that’s what has happened.

Erik immediately felt a desire to tell other people about Jesus, and became involved with evangelism in prisons. Under the mentorship of an older pastor, Erik later completed an internship program at Omaha Bible Church, where he then went on to become Assistant Pastor.

Erik became the primary preaching pastor of Emmaus Bible Church when it was planted in 2011. From the very beginning of the church's life, Erik has consciously aimed to cultivate a culture of evangelism as part of its DNA: Gospel Shaped Outreach draws on the ideas and principles that Erik has been wrestling with alongside his own church family.