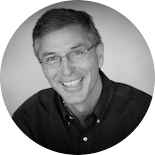 is the Senior Pastor of Christ Community in Kansas City, MO, and is the author of a number of books, including Work Matters: Connecting Sunday Worship to Monday Work.

Tom was raised in a small town in Minnesota as part of a large family. He can vividly remember coming to faith at the age of just eight years old. As he grew up, he was nurtured in his faith by his family and the local church.

Tom learned a lot about work growing up on a farm, and he worked in the food service industry both before and during college, where he studied business. This gave him an appreciation of the value of hard work—and of the sanctifying effects of dealing with difficult members of the public!

Later, Tom went on to study at seminary, before moving to Kansas City to start Christ Community Church from his own front room. The church began with just two members—Tom and his wife, Liz—but almost 30 years later it has grown to include five campuses. As a pastor, Tom has been struck by the numerous and varied workplace challenges members of his church face each week. He has grown in his conviction that properly understanding the theology radically transforms day-to-day life for believers. To that end, Tom is President of Made to Flourish, a network that encourages other pastors to connect Sunday to Monday in their teaching and discipleship too.